Improve the aesthetics of your smile with white tooth fillings 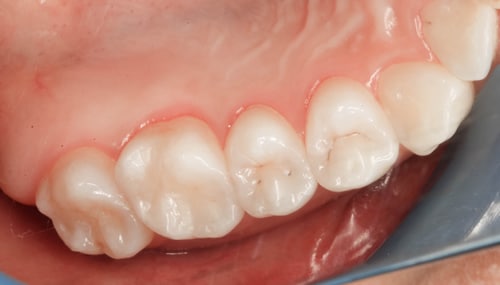 White fillings are classed “minimally invasive dentistry” as they work to improve your smile while conserving as much of your natural tooth structure as possible. A white cavity filling replaces part of a tooth that has been lost or had to be removed because of dental decay. Most people will develop dental decay to some degree throughout their life. To prevent the decay from causing more damage to your teeth and oral health, it should be treated as soon as possible, with the most common form of treatment being a filling.

Most people are familiar with traditional metal fillings called amalgam. However, an increasingly popular alternative is white fillings. The white dental fillings are made of composite resin, to create a much more natural-looking and virtually invisible cavity filling. This allows you to treat your teeth and prevent any further damage, without your smile being damped.

In many cases, we can simply remove existing worn-out fillings and decay, leaving only the natural tooth remaining. The lost tooth structure can then be replaced using white composite resin, resulting in strong, lifelike white tooth fillings. This method is quick and pain-free as we only clean out the damaged areas, whereas, with a metal filling, the entire cavity often must be removed.

Many people prefer white fillings rather than metal ones as they look more natural, particularly if the fillings are towards the front of your mouth. White tooth fillings can also be used to replace existing metal fillings to achieve a brighter smile. As traditional metal fillings often contain mercury, they are not recommended for pregnant women. However, a white filling is safe for pregnant women and can prevent further or more extreme treatment such as a root canal from being needed later.

For more information about our white dental fillings, please contact the practice.

Cheslyn Hay Dental Practice is rated 4.9 out of 5 based on 8 ratings with Google.

"The most relaxed and cared for I have ever been! A serious compliment to the skilled practitioners and staff, highly recommended!"

"My visits to your practice have been an experience I will never forget; kindness and patience in abundance. A big thank you to you all"

"Fabulous! Was really scared after going to another dental practice. Staff are great, very friendly. Will look forward to coming back next time."

"As someone who doesn’t normally enjoy visiting the dentist, I was very pleasantly surprised. Staff are lovely. The dentist was brilliant and I felt completely at ease. Absolutely brilliant! I will be recommending the dental practice to all."

"As someone who is terrified of dentists I found the experience manageable. I would say that without that fear it would’ve been a pleasant experience. I would definitely recommend without hesitation."

"All the staff were very friendly as always and welcoming. The dentist and hygienist very knowledgeable. Very clean environment and I felt very safe whilst getting my teeth checked and cleaned. I would definitely recommend."

"As always a lovely friendly and welcoming atmosphere. I have been for my routine check up and hygienist appointment, both carried out professionally with care and consideration - thank you."

"Lovely friendly staff that put you at ease as soon as you walk in (and I’m petrified of the dentist). Pricing is good and they don’t up sell you on anything that you don’t need, they're very honest. Had been with my old dentist for nearly 20 years but wasn’t getting the results I wanted . I came to this one based on a recommendation from a friend and I will continue to stay with them as they are brilliant !"

"Extremely professional in every respect."

"Very welcoming and friendly staff. Very knowledgeable about what they do and the options open for you as regards the treatment you can have. Highly recommended"

"Staff were so nice and pleasant, nothing was too much trouble. The place was so clean, I would recommend them to friends and family ."

"Overall very happy with my experience"

"Very friendly staff. Good clean atmosphere inside, no medical smell. A good practice to belong to."

"I get so anxious about visiting the dentist, but the staff are so friendly and understanding that I feel fine as soon as I sit in the chair. I can not recommend these guys enough!"

"Thank you so much for curing me of my fear of dentists!"

"100% pleased with the treatment, felt at ease, couldn’t wish for better."

"Many thanks to everyone at the practice for your fabulous care, friendliness and patience that has no boundaries."

"Always a professional service and pleasure to visit"

"I would like to thank you all for the excellent treatment I received and am delighted with the results. My biggest regret is not having it done sooner! Your dedicated team are the epitome of professionalism and I can thoroughly recommend this practice to anyone. I can say in all honesty that a visit to this practice is a thing I look forward to."

"After not so good experiences elsewhere, it has always been a pleasure to attend your practice. I’ve always been put at ease and think of you as friends."

"I came to your surgery after not visiting a dentist for 15 years due to my dental phobia. The surgery had a lovely welcoming feel with no horrible antiseptic smell and the staff were absolutely brilliant. I didn't feel embarrassed about my phobia and everything was explained to me in detail. I can not believe that I have made a further appointment to start my treatment and now feel less anxious about it. Thank you, you don’t know the difference you have made."